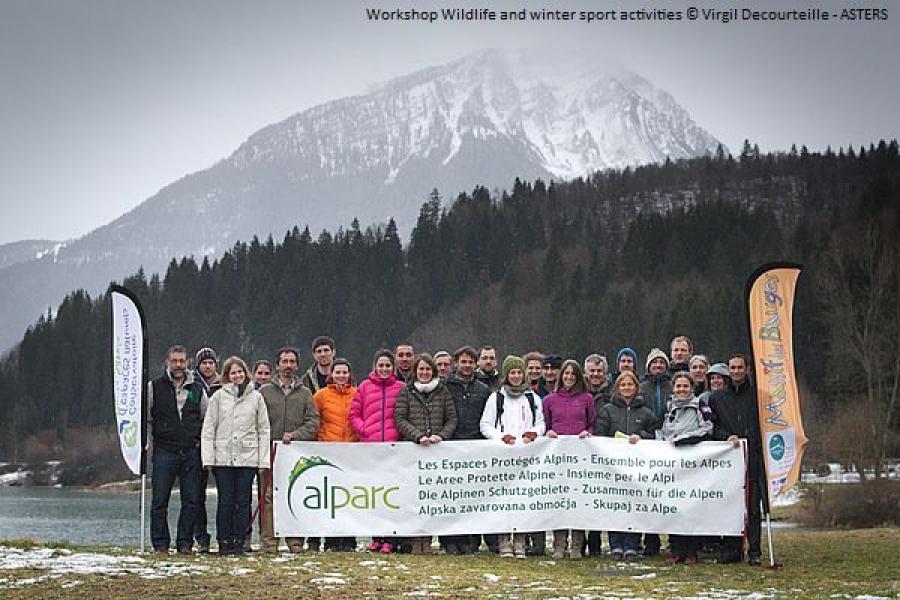 Throughout the Alpine arc, sports and leisure activities have mushroomed as never before. Ski touring, free riding, trekking with or without snowshoes, practised by amateurs or sportspeople during the winter, have become widespread in our societies and all over the Alps.

While open-air activities are beneficial to humans, they do have significant negative impact on mountain wildlife. Species such as mountain galliformes, chamois and ibex, as well as the mountain hare, have become the involuntary targets of this disturbance. Many scientific studies have clearly demonstrated this impact (see the workshop presentations of Friday 4th March). So, how can winter sports activities be reconciled with the preservation of wildlife? How can those who practise such activities be made aware of this reality? Is coexistence possible and under what conditions?

A large variety of initiatives across the Alps

Currently, different initiatives, from national to local level, are being undertaken across the Alps. They relate to monitoring studies and methods, management measures or awareness raising campaigns for those who practise winter sports. Even if they come from different spheres, those stakeholders concerned today acknowledge the extent of the problem and its potential development, a factor that calls for action on different fronts.

A selection of current studies and initiatives was presented and discussed during the international “Wildlife and winter sport activities” workshop. This workshop was the first of its kind and brought together a large number of participants (around 50), coming from different fields across the Alpine arc (6 countries were represented): governments, Alpine Clubs, scientists, environmental NGOs and, of course, the protected areas. For those taking part it was an opportunity to present their at times creative initiatives, to discuss practices and to pool knowledge, experiences and ideas.

As for the initiatives, there have been large-scale awareness-raising campaigns such as the “Respektiere Deine Grenzen” campaign (“Respect your Limits”) which has been carried out by the Voralberg (AT) federal state government for more than 10 years now, or the “Respecter c’est protéger” (“To Respect is to Protect”) campaign, an adaptation of that campaign at a national level in Switzerland and supported by the Swiss Alpine Club and the Federal Office for the Environment FOEN. These two campaigns stand out by their political will to support this approach using significant means. Herbert Erhart from the Vorarlberg region explains: “We have chosen to say: Yes, nature is worth these efforts”.

On the other hand, diverse initiatives are being carried out in the Alpine protected areas in their own territories, bringing in other different local stakeholders. Examples of this are the Gesäuse National Park (Styria, AT), the Triglav National Park (SI), the Mont Avic Nature Park (IT), the transborder Nagelfluhkette Nature Park (Bavaria/Vorarlberg, DE/AT) and the Bauges RNP: management of visitors by marking out and demarcating quiet areas is generally accompanied by awareness-raising actions targeting different types of activity (see presentations of Thursday 3rd March). The workshop has proved that the protected areas play a key role in the development of these measures in the Alps as they are at one and the same time mediators in approaches to governance and pilot regions for innovative practices which can spread beyond the parks themselves.

During the workshop there was an opportunity to see a local measure implemented by the Bauges RNP: the setting up of a perimeter of protection for the wintering areas of the black grouse at the Col de Chérel.

A single will: one common approach for the Alps

It is clear that, for the moment, approaches and initiatives are scattered over the Alpine territory, developed and carried out in very assorted ways. Some territories have made more progress than others with respect to the different lines of intervention: monitoring, management of visitors and awareness-raising. In Italy, for example, awareness-raising campaigns and actions remain limited. Nonetheless the problem is the same throughout the Alpine arc.

So, the delegates identified one central need during the discussions: the need to pool experiences and advances and develop a common approach on an Alpine level, from monitoring to visitor management to a common form of communication, while at the same time mobilising the different stakeholders and interested parties.  Such a project would guarantee greater visibility of the issue, awareness-raising of greater impact and a better quality of management throughout the Alps. A common approach would moreover contribute to more coherence and cohesion in the Alpine arc.

A first step in this direction was taken during the workshop: delegates expressed their wish to set up a working group on this theme in order to work in networks on an international scale, go   into some ideas in depth and develop a common project.

A big thank you to all the delegates for attending and for the rich, animated exchanges and discussions! Thanks also to the Bauges RNP and Asters teams for organising the workshop, and in particular to the Bauges RNP for hosting the event in their territory.

To read the full report on the workshop, see below: